How YOU Can Help
General FAQ's
General Notes

How YOU Can Help

All victims want and need help. Even most abusers really do want help. All the world needs is people who want to help.   MORE Helpers = LESS Abusers and Victims...   Let's start changing the world! 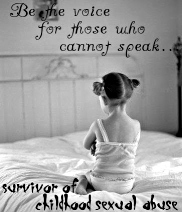 How potential depends on how early they got help. They have an illness that is very similar to drug or alcohol addiction. The deeper in they go and the longer they stay in, the harder it is to get out and the harder it is to stay out. It could also be compared to other "not normal" sexual interests. Gays and lesbians are interested in "the wrong kind of people", but even experts say they have no control over that. It's who they are. Obviously there's one big difference. At least they, usually, couple with people their own age and therefore the choice is both of theirs. Between adults and children, it's not a 2-way choice, even if the child (or teen) thinks it is their choice. But, the fact is, in each type of situation, it appears to be a mental abnormality, or as some say, "faulty wiring".

There is some similarity between this page and the FAQ's page.

Help prevent people from becoming victims:
Teach children at an early age:
- that it is ok to not keep secrets if they don't want to
- to let you know if someone does something that didn't feel right or that bothers them
- that it is not right for someone to touch them anywhere if it doesn't feel right or if it confuses them
Be careful choosing babysitters, yes, even female ones. Even licensed caretakers can be abusers. Sometimes that's why they're in that profession. Get references. If it's someone you know, do they show any signs of the possibility of being an abuser? You can find those signs on this site.

If you think someone may be a victim, you can either ask them some questions yourself, or take them to someone with some training to talk to them. It could be a school counselor, a therapist, a church leader, or your family doctor. You need to find out if they have been abused without putting ideas of what to say in their head, and you need to remember that the abuser has given them a good reason to not tell.

If you don't know who to go to or what to ask, feel free to contact me for some free advice.

If a young person comes to you and tells you someone did something to or with them, try not to panic or show fear because they might just stop there. Listen to what they say, and believe them, unless there is something going on that can give them a reason to make it up, like a custody battle, or a new step-parent they don't like. That part can be tricky because step-parents are one of the more common abusers, especially step-fathers, but they aren't all abusers. Many step-parents do a better job than parents. If a child appeared to like or at least accept the person at the beginning, but seems to be afraid of the person later, it might be a problem. If they don't like the person right from the start, it could just be jealousy or not wanting to accept the replacement of the natural parent.

In ALL cases, once you know someone has been abused, go to the police. Their job is to handle things like this.

Help victims recover from abuse:
When a child has been sexually abused, they will need a lot of love (proper love) and a lot of patience to get over what has happened and live a normal life. They should get counseling, even if they say they don't want to. Make sure they know that what happened was not their fault.

Help abusers (or potential abusers) get the help they need:
If you know an abuser, or potential abuser, don't just hope they will stop, change, or get better? Without help, they won't. In many cases, especially child abusers, the abuser never gets reported because they are loved and/or needed. That can make it hard to report someone, and often, people just pretend it's no big deal, but abusers need help. The victims don't deserve the abuse. The abusers will not stop on their own. Abuse needs to be stopped and usually the only way to stop it is with help.

Help past abusers stay past abusers:
In general, past abusers have a good chance of returning to what they are used to, especially if they have been abusing for a long time. Some of them really do want to change, but it's not easy. An abuser becoming a good person needs the help of others, especially those who love him (or her). They need to know people are their for them, to help them in times of crisis. One of the reason people abuse is because they have things bothering them and have no way to let it out or do anything about it. Be there for them and there is less chance of the abuse returning.


I will be adding more here soon.

I am NOT a counselor, therapist, or any kind of licensed professional in this area and I have not had any training in this field. I'm just someone who knows a little about abuse, a lot about child sexual abuse, and even more about child sexual abusers. I want to help victims and abusers. By helping abusers, we will have less victims to worry about.

©2019 - Material and content is not for use elsewhere without permission.